The Ancient philosopher Pythagoras once said that “The Universe begins with bread”. Although this saying might sound as an exaggerated statement, there is no doubt about the fact that the bread has always had a very significant impact on humanity, in different eras. There were wars fought in its name, there were plenty of riots caused by its price and, in the same time, it should be mentioned the fact that over time, people have managed to survive for very long periods of time with nothing but bread and water.
In no other country is bread more important than in Lebanon. It is a core part of Lebanese culture and an essential element in traditional Lebanese food, being always present at almost every meal. Bread is so important in this part of the world that some Lebanese refer to it using the word “eh” or “esh”, which would translate as “life”.
In the Lebanese culture, as in the majority of cultures from all over the world, there is a special significance for offering and tasting bread with salt. Although in other countries this combination is used for expressing hospitality, in Lebanon, bread and salt are symbols of an alliance, of a strong bond between two people. The fact of eating bread and salt with a friend is considered to create a moral obligation that imposes gratitude. This signification is, also, expressed in the saying “There is bread and salt between us” (بيننا خبز وملح).
In what concerns the Lebanese cuisine, the bread is consumed with almost every course. There are two types of Lebanese bread – khub, which is the equivalent of pita, and marqoua, which is very thin. Lebanese bread can accompany any mezza, whether it is a cold or a warm one, such a homos, labneh or falafel. In some mezza, bread is already included, such as in shaworma, arais (made with beef, beef and cheese, chicken, sujuk or just with cheese) or rolls with various stuffing. Moreover, bread can be consumed as croutons, which are just perfect with a salad, such as Fatush, or with a delicious lentil soup.
For Lebanese and for those who love Lebanese cuisine, life would not be as beautiful (and tasteful, of course) without the bread that completes the taste of every food! 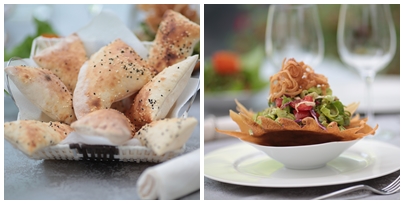