When someone tastes for the first time a Lebanese dish, the first comment would be: this food is really tasty! And this remark is true, indeed! Besides traditional spices like salt, pepper, oregano, garlic etc, the Lebanese cuisine uses also some special spices that give flavour to each food item:
1. Za'atar - is a mixture of thyme, oregano, marjoram and slightly toasted sesame seeds. It can be used over pita bread, with olive salad with walnuts, in sambousek with cheese and, because we love it so much, we have created a special salad called Four Seasons with Za'atar, but the star of the menu remains chicken with Za'atar that satisfies all taste buds.
2. Cardamon - has a unique taste, spicy-sweet, slightly flavored. It has aphrodisiac qualities and is usually used to spice sweets, coffee, tea etc. We have used our imagination and we came up with a chicken dish: chicken with cardamom whose taste and flavour is unmistakable.
3. Sumac - a sour condiment that is used sprinkled liberally over salads, Fatoush, Tabbule, and even to soften the strong taste of meat.
4. Dried green mint - Known for its therapeutic properties, mint is generously used in our kitchen, in the Lebanese lemonade and as flavor to salads.
5. Lebanese seven spices – is a mix of spices (black pepper, allspice, cinnamon, cloves, nutmeg, ginger, fenugreek) that brings a burst of flavor to the taste buds. They are used to spice different meats, and in some dressings. 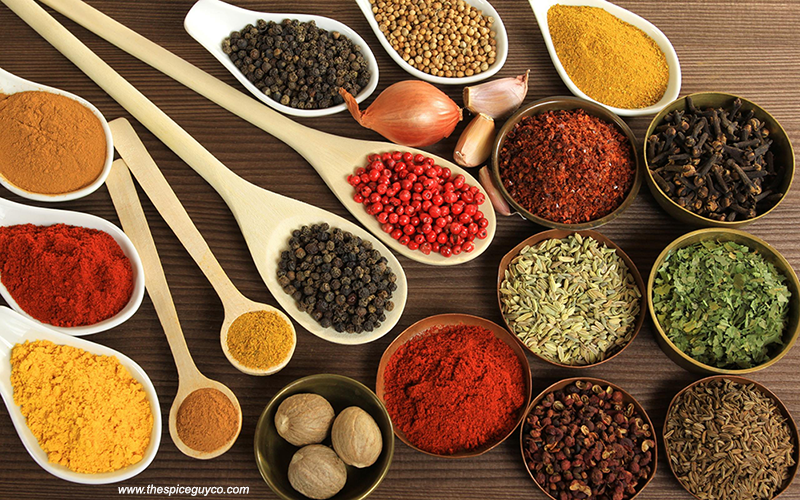